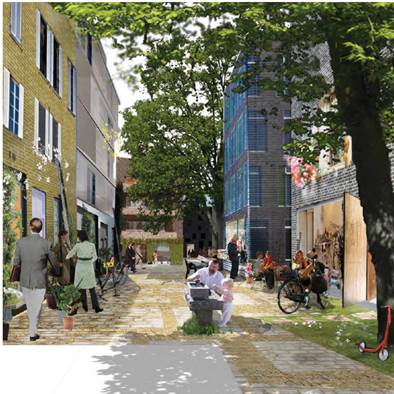 From Street to City! MariMatic's MetroTaifun® vacuum collection systems to the City of Odense, Denmark

Since the 1960's the four-lane Thomas B. Thrige Street has cut the City of Odense into two parts. Now this area is transformed into a lively and vibrant urban area.

In the summer of 2014 the street was closed for traffic and construction in the project area began.

The new town, which grows, will primarily consist of homes but also offices, shops, cultural institutions, restaurants and cafes.

Below ground there will be parking for cars, while above ground comes green squares and urban spaces.

Pedestrians and cyclists must have safe routes and to make room for a light rail.

The new district is part of an overall strategy to transform Odense from a large Danish city into a Metropole and attract even more residents and businesses to the city.

The MariMatic's MetroTaifun® technology ensures that no garbage trucks need to enter the new district and garbage doesn't need to be stored for days before it is removed.

Furthermore the City of Odense is planning to connect existing districts of the city to the waste terminal of which construction started in June-2015. The project will span overall several years as the individual buildings are completed, however, the terminal is scheduled to remove waste from the new concert house ODEON by July-2016.